For over a year, Manchester United have been credited with an interest in Borussia Dortmund star Jadon Sancho.

The England international is on the front page of today’s edition of AS and it’s stated that ‘Real Madrid look at Sancho’.

He has 20 goals and 20 assists (17 goals and 17 assists in the league) in all competitions this season. It’s claimed an excellent relationship between Real Madrid and Dortmund would ‘allow positions to be reconciled’ if the three parties sit at the table.

However, the player’s desire will remain important as he wants to make a jump to a top club in his quest for individual and collective goals.

AS report Manchester United ‘want’ to sign Sancho and make him their new Cristiano Ronaldo. They state the Premier League side have not found such a talent since the Portuguese forward left the club in 2009. Ole Gunnar Solskjaer’s idea is to partner the Dortmund wideman with Marcus Rashford to form a young attacking division at United.

According to the claims, the Old Trafford club offered €140m for the 20-year-old in February, but the German side turned down their proposal. That hasn’t been reported in Germany and the figure seems too high to offer so early in a transfer race. 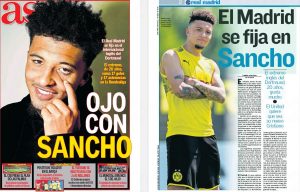 Even though Real Madrid are looking at Sancho, Manchester United are unlikely to face any competition from them in the upcoming window.

The report adds the La Liga club are thinking about Sancho for 2021 and that’s because Zinedine Zidane’s side have ruled out any big money signings this summer.