Manchester United have turned their attention to Inter Milan defender Stefan de Vrij as they look to bolster their defence this summer.

That’s according to Gazzetta Dello Sport, who say the Dutchman could be set to depart the Italian side as his contract is expiring next summer.

They explain that Inter are targeting incomings, but that will depend on how many leave, with Milan Skriniar and De Vrij another two who could be on the way out.

The latter is 30 years old and earns around €4m per season, and should offers arrive, Inter will consider them to avoid losing him on a free transfer as they did with Ivan Perisic.

That’s where Manchester United come into the picture, with it explained they have ‘turned on their radar’ to the defender. 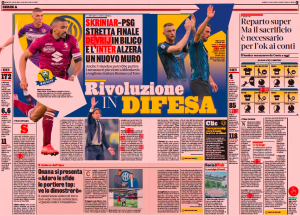 They’re yet to make a move for the defender, and he is ‘waiting for a call’ to decide his future, either from Inter or others.

He won’t cause a fuss or ‘go to the clash’ as he is not one to make noise about his situation, but should he decide to move on, then there will be no way to change his mind, as was the case when he left Lazio for Inter.

It is, then, up to Manchester United to make their move, but should they do so, they will find Inter Milan more than willing to do a deal.