Manchester United have been regularly scouting Portuguese football in recent years and that doesn’t show any chance of stopping soon.

Covid-19 brought the scouting trips to an end for an extended period, but now officials are allowed back at football matches in Portugal, the Red Devills are once again popping up on repeat scouting lists.

Now according to more claims from the local media, Manchester United have been watching Porto as well. 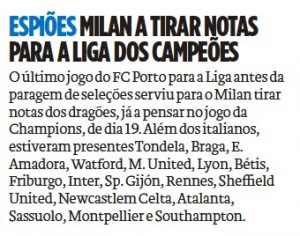 Newspaper O Jogo is one of those who say the club had an emissary at the Estádio do Dragão to watch Porto’s 2-1 win over Paços Ferreira.

Since Manchester United probably wouldn’t be interested in players from smaller Portuguese clubs, we can probably guess they had an eye on talents from the Dragons only.

So those who may have drawn attention are left-back Wendell and striker Luis Diaz, who both scored in the comeback. The latter shared the Copa America 2021 Golden Boot with Lionel Messi and got in the best XI of the tournament.

Midfielders Mateus Uribe and Vitinha, along with striker Mehdi Taremi, had good performances as well.

Manchester United haven’t been linked to any of those players yet, and with the club starting over with their scouting in Portugal, perhaps some of them will emerge as targets in the future.