The Bruno Fernandes saga rumbles on in the Portuguese media, and the newspapers there have different takes on the situation.

Record, who have perhaps been the calmest throughout, have Bruno on their front page, and the message is clear: Sporting are telling interested clubs they want ‘€70m cash’ for a summer transfer, as a minimum.

Those interested clubs are named as Manchester United and Atletico Madrid.

Manchester City interest is touched upon, but it’s made clear there’s no deal with the Etihad club, or even serious negotiations.

That Sporting want €70m cash means they’d like that amount upfront, rather than through bonuses based on future performance. It’s not an amount Manchester United would find hard to reach, given the club’s finances, but they’d probably try to get the Lisbon club down. 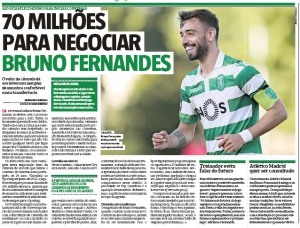 Record point out that Sporting wish to ‘exploit’ the interest in Fernandes, which is perhaps why the City claims were pushed to the Portuguese media, putting more pressure on Manchester United and others.

As a reminder, Bruno has 31 goals and 17 assists so far this season. He’s plays as an attacking midfielder and operates almost equally on both sides of the pitch.