Inter Milan striker Lautaro Martínez has turned down the chance to join Manchester United, with his heart set on a move to Barcelona.

The Argentine striker has been in red-hot form under Antonio Conte this season, scoring 16 goals in 31 games in all competitions thus far.

Europe’s major clubs have all been linked with making a move as a result, including Manchester United, who were thought to be willing to offer him big money to move to Old Trafford.

However, according to Sport, they have already seen their efforts dismissed by the player as he has his eye on a move to the Nou Camp instead.

The newspaper reports that United seemed ‘willing’ to pay Martínez’s €111m release clause and made a ‘thrust’ for his signature a few weeks ago.

After receiving ‘approval’ from Inter Milan, they spoke with the striker’s ‘environment’, but he declined the offer, with his agents feeling that he may not adapt well to English football, despite the fact it ‘surpassed’ the offer from Barça.

Manchester City also approached the player at that time but, unlike their rivals, did not make an offer. 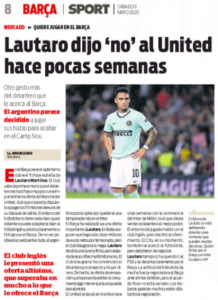 Lautaro has made it clear he does not want to join Manchester United, City or PSG and instead prefers a move to Barcelona, something which gives ‘negotiating power’ to the Spanish side.

They are yet to reach a final agreement with Inter Milan over a deal, who are delaying the talks in the hope that Martínez will stay for another year.