Manchester United youngster Tahith Chong is on the verge of a loan move to Werder Bremen, with talks between the two clubs ’well advanced’.

That’s according to Delmenhorster Kreisblatt, who provide a big update on the winger’s move from Old Trafford.

Chong has been heavily linked with a move to the Bundesliga side for the last week, with the story developing quickly in the last few days.

Several reports have indicated that his agent has already held talks over the move and said agent has publicly admitted that his client wants to join Werder Bremen.

This was today backed up by Werder Bremen chief Frank Baumann, who Bild report as saying; “It is the case that we have conversations, good conversations.

“For us, this is a very interesting player. A guy that we can use in the wing position.

“There is still a lot to discuss; we have not yet reached an agreement. We will see what results from this in the next few days or weeks.”

Delmenhorster Kreisblatt provide all the details on the potential transfer, backing up claims that Bremen can only afford a loan deal.

Manchester United are fine with that and plan to loan Chong out for two years but will not include an option to buy.

These negotiations are ‘well advanced’, yet the final decision will be United’s, and that is ‘pending’. There is, though, a possibility the deal could ‘happen very quickly’. 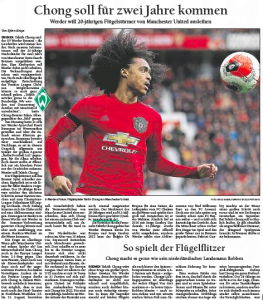 That is because Chong’s agent met with Baumann to talk about his client’s future on Tuesday, with Werder keen on him as a replacement for Milot Rashica, although those two deals could be done separately.

Manchester United, for their part, are keen to loan Chong out and have decided that he needs to move to another club so that he can develop for the future.

They see a move to Werder as good for him as they have a history of taking youngsters on loan and developing them, namely Kevin de Bruyne and Serge Gnabry.

Gnabry particularly enjoyed a solid season and one year later moved to Bayern Munich and Manchester United’s hope is Chong can enjoy a similar rise.

They see him as a ‘rough diamond’ who ‘urgently’ needs game time and that is something Bremen can offer, with a deal very much in the final stages.