Indeed, he loved it so much he still has connections to the Spanish city and returns there when he can. At times that’s annoyed some at Barcelona, especially if he pops in the Andalusian sun the day after a bad result.

Given all of that, the assumption he wouldn’t fancy a move to Manchester United is an easy one to make. The lifestyle and climate would be completely different to the one he and his family love the most.

Marca have it a little differently on Sunday. They report Inter Milan, Juventus and Manchester United have been ‘stalking’ the player ‘for months’ and whilst he previously wasn’t keen a move, he’s now ready to listen to their proposals. 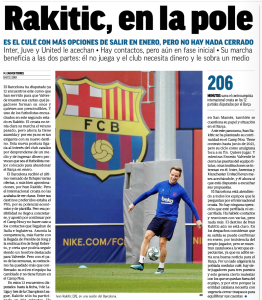 None of the three would provide the climate he’s keen on, yet they’re all big clubs and it’s perhaps not time to kick back and enjoy semi retirement yet.

There’s been contacts over a transfer, with the suggestion being Manchester United are one of those reaching out, and it’s thought Rakitic is the player most likely to leave Barcelona in January.