Home Europe Manchester United send official for U21 defender, his club will look for...
SHARE

After some reports from Turkey over the weekend, it’s now the Portuguese press who claims that Manchester United are interested in the Alanyaspor defender Merih Demiral.

Newspaper O Jogo have learned the Red Devils had scouts at the U21 match between France and Turkey on Friday, and had some special attention on the 20-year-old.

The reason why the Portuguese media is interested in the case is pretty simple. Despite playing for Alanyaspor this season, Demiral actually belongs to Sporting, who loaned him to the Turkish club during the summer window.

However, Demiral shouldn’t return to Lisbon. O Jogo claims that Alanyaspor will be activating their buying clause for the player, and will sign him on a permanent deal for €3.5m. 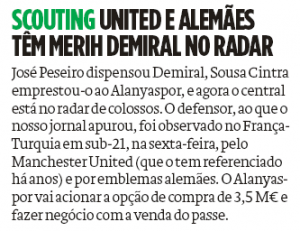 It means that they will be able to make quite a good profit should good bids arrive.

According to the newspaper, German clubs are interested in the defender as well.

Given this seems to be being pushed from Turkey, Manchester United may have been brought in to hype things up.