When Manchester United re-signed Cristiano Ronaldo, it was a whole fanfare.

Understandably, the vast majority of the Old Trafford faithful were thrilled at the prospect of their club icon donning their jersey once again, and he started his second spell for the Red Devils in style, scoring two goals against Newcastle United in a 4-1 win.

His second game, however, was anything but a success, as Manchester United succumbed to a 2-1 defeat at the hands of Swiss side Young Boys following a red card and a dismal backpass from Jesse Lingard, who replaced Ronaldo a few minutes earlier.

Criticism was handed out left, right and centre by the British press, with many questioning Ole Gunnar Solskjaer’s decisions throughout the game, especially once Aaron Wan-Bissaka was sent off, and Corriere dello Sport pile on on Thursday with an article focusing on the Portuguese superstar.

Analysing the game, they come to the conclusion that the match against Young Boys ‘raises the old problems around Ronaldo’. 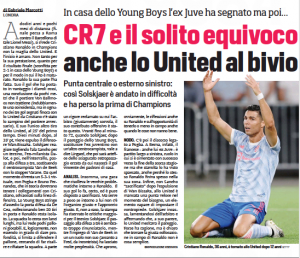 While he did score his goal and sacrificed himself for the team when needed, they point out ‘it’s of little use if there is not the right personnel and the right approach around him’.

When Solskjaer changed things around after the sending off, going far more defensive, this ‘opens up reflections on Ronaldo and on whether or not to keep him on the pitch even when things are not going well’.

On top of that, they point there is an issue with Paul Pogba, who found some success down the left wing of late, but the inclusion of Ronaldo saw the pair get into each other’s spaces at times.

Taking off Jadon Sancho also didn’t help, and while Solskjaer blamed the referee, feeling his side needed a draw, they add that while he might be right, ‘it is clear that finding Ronaldo’s right position on the pitch is not easy’.