There is ‘cautious optimism’ at Roma that they can reach an agreement with Manchester United for Chris Smalling this summer.

That’s according to Corriere Dello Sport, who say the two sides are still €8m apart in their valuation of the player.

Smalling spent last season on loan at Roma after it was made clear that there was no place for him at Old Trafford.

The loan spell proved to be a highly beneficial one, with the defender becoming a key player under Paolo Fonseca and pretty much reviving his career.

He is keen to make the move a permanent one, as are Roma, but so far months of negotiations with Manchester United have not reached a positive conclusion.

Corriere provide the latest update on the situation today and say that while there is ‘cautious optimism’ a deal can be done, ‘patience is needed’.

They explain that United chief Ed Woodward, Roma’s Guido Fienga and an intermediary have been negotiating for a ‘few days now’ to try and get a deal done. 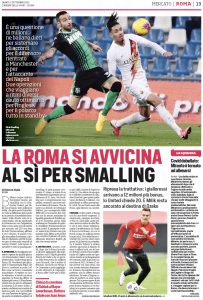 So far Roma have offered €12m plus bonuses, but Manchester United are refusing to lower their demand for €20m upfront.

Those demands have left the negotiations with ‘nowhere to go’ at this stage, but it is expected that, as the days go by, Smalling’s ‘explicit desire’ to make the move will help the two clubs get closer to an agreement.

Roma are desperate to get it done, with it explained that the defender is considered an ‘important investment’ by the club. Fonseca is particularly keen to get a deal over the line as he considers the defender ‘fundamental’ to his plans, particularly tactically.

With an €8m difference in asking price, though, and money tight at Roma, this long-running saga looks like it has plenty of track left to cover.