Anthony Martial hasn’t featured for Manchester United since playing the full 90 minutes in his side’s 3-1 FA Cup defeat at the hands of Leicester City in March.

The forward limped off in France’s 2-0 win over Kazakhstan at the end of March and has been sidelined since then with a knee injury.

A few days after Martial suffered a setback, Ole Gunnar Solskjaer admitted the 25-year-old may not feature again for the Red Devils this season.

L’Equipe on Tuesday explain the former AS Monaco man has ‘resumed training with Manchester United yesterday’.

Although he won’t be fit enough to take on AS Roma in the Europa League semi-final clash on Thursday nor will he be ready for Sunday’s trip to face Aston Villa, there has been a positive update on the Frenchman’s recovery.

The newspaper claims Martial ‘still has a good chance’ of being ready for the remaining four league matches and also for the Europa League final, they progress further in the competition.

This will not only come as a good news for the Old Trafford club, but also for the player 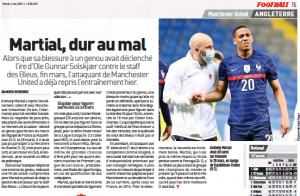 himself as he hopes to become eligible to make it to Didier Deschamps’ 26-man France squad for the Euro 2020, which will be announced on May 18th.

For L’Equipe, Martial’s recovery means one of two things: either that United’s ‘medical staff worked miracles’, or that the initial ‘calmness of the national team’s was not so unfounded’ after all.