Super-agent Mino Raiola has been in discussions with Manchester United for weeks, but they are not regarding a deal for Erling Haaland.

That’s according to SportBILD, who explain what’s going on behind the scenes with the Borussia Dortmund star, who continues to be linked with a move to Old Trafford.

The young striker’s name has regularly been associated with Manchester United for the best part of the last year, despite him only joining Dortmund from Salzburg in January.

His impressive form in the Bundesliga since then has done nothing to stem the flow of rumours, with some believing that the striker, who worked with Ole Gunnar Solskjaer at Molde, could be destined for a move to Manchester.

However, SportBILD argue against that today and state that neither the player nor Dortmund are even considering a transfer.

They explain that while it is true his agent, the infamous Raiola, has been in contact with Manchester United for several weeks that has nothing to do with the Norwegian.

In fact, it’s all to do with an extension to Paul Pogba’s deal, which had been set to expire next summer before United recently activated a one-year extension option.

Haaland, for his part, ‘is not currently thinking’ about a move. He would prefer to stay at Dortmund, where he is guaranteed game-time, to develop his game and get himself on the same level as the likes of Roberto Lewandowski and Karim Benzema.

He would only switch to a ‘world club’ if he was to be a regular player, having no desire to be a ‘bench pusher player’ somewhere else. 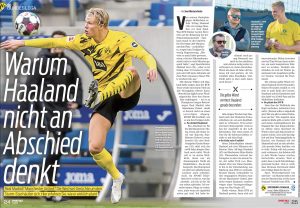 He leaves his future in the hands of his father Alf-Inge Haaland and Raiola, but they both know he has a place at Dortmund where he can prove himself on the international stage and work to become ‘an even more complete striker’.

That is why they ‘consciously’ chose to go there in January, despite offers from larger clubs being on the table.

Dortmund have no concerns either. They are not worried that the big clubs will ‘turn his head’ and it’s explained there is ‘no discussion’ about him.

Thus, despite the constant rumours about Manchester United and Real Madrid, all three parties, Haaland, his advisors and Dortmund are in favour of him staying where he is, so that’s what he’s set to do.