Manchester United interest in Barcelona’s Ansu Fati is becoming something of a legend in the Catalan media.

Ever since the player came through at the Camp Nou, there’s been claims of efforts from the Red Devils to snatch him away.

Much of it has felt like attempts to build good PR for the La Liga side, with their local media insisting they’ve rejected huge offers because they know how important Ansu Fati will be to them in the future.

These claims often come when things are going badly, so it’s no surprise to see them again in the same week Barca were swatted aside by PSG.

Mundo Deportivo claim Manchester United ‘presented an offer’ for the 18-year-old worth around €150m. This has been claimed several times and the alleged offer is always above €100m. 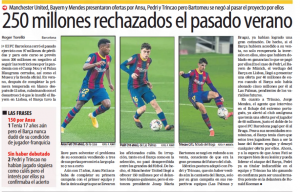 It’s not made clear when Mundo are claiming this offer was made, yet last summer is a good bet.

Others, including Bayern Munich, are put in a similar situation and, again, it all feels like Barca PR.