The Italian media will not give up linking Manchester United with a move for Kalidou Koulibaly. Perhaps they can be forgiven for the never ending stories, because they’ve been encouraged by Napoli to run them.

Aurelio De Laurentiis went on record to say he’d refused an offer of around €100m last summer, and it was clear that off record the club named was Manchester United.

With Napoli needing sales to fund the purchases they plan to make this summer, talks of exits has increased again, which inevitably leads to more claims around Koulibaly moving to Old Trafford.

This weekend, La Repubblica reported Manchester United are in ‘pole position’ to sign the defender this summer. They report his exit is more than simply an idea, presenting a transfer, somewhere at least, as likely.

The Premier League seems the ‘obligatory destination’ for the Napoli player, and it’s stated talks between Napoli and United didn’t end, but were instead ‘postponed for twelve 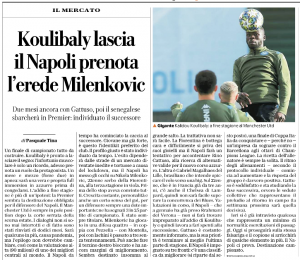 Napoli want €90m, which feels wholly unrealistic for a defender who turns 29 years of age in June and who hasn’t had a great season so far.

Despite the claims, there’s every chance United’s name is being used.