The updates on the future of Marcos Rojo continue coming up from Argentina, and the situation seems pretty clear by now.

Starting with a report from newspaper Olé, they say everything we’ve already covered this week, claiming the player has already said yes to the offer from Boca Juniors.

Even though his former club Estudiantes are also in for his signing, there’s the wish to play for the Buenos Aires side, especially because his father is a fanatic fan.

What they need now is the agreement with Manchester United. Boca Juniors won’t get involved in this, as it’s Marcos Rojo who needs to rescind his contract with the Red Devils and make the move for free. 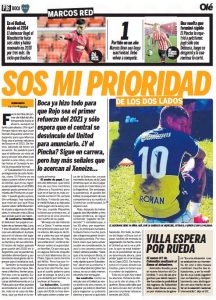 The scenario looks clear, but in an update from TyC Sports today, it’s claimed that Boca Juniors should wait a little more until they get a final response.

They claim that Rojo is also waiting for offers from Europe, which means he has until the 31st of January to get the proposals. Only then he’ll be sure that getting back to Argentine is what he really wants.

Chelsea ‘cannot backtrack’ out of transfer agreement – Ball ‘exclusively in...