Axel Tuanzebe’s loan move to Aston Villa started off reasonably well, with the Manchester United owned defender picking up a good amount of minutes at the start of the season.

That dropped off even before Steven Gerrard arrived as the club’s new manager, and then the situation got worse.

Therefore, the player and his parent club are opting to end the loan move early, and instead sending him to Napoli for the remainder of the current campaign.

Corriere dello Sport reports the move is all arranged, and Tuanzebe has already ‘packed his bags’ ahead of the transfer. He’s waiting for the Naples club to call him for a medical, and then the switch can be completed. 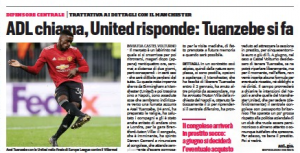 According to the Italian newspaper, there will be no purchase right for Napoli in the deal.

Should the Serie A club want to sign the player permanently at the end of his loan spell, then they’ll need to start fresh negotiations with Manchester United.

The 24-year-old has a contract at Old Trafford which lasts until June 2023.