Ilaix Moriba has a goal and two assists in four league matches since making his first team debut for Barcelona in January.

His good start with Ronald Koeman’s side has caught attention from elsewhere and in particular, from Manchester United and RB Leipzig.

Earlier this month, Mundo Deportivo reported the Red Devils and the German side have put forward ‘firm offers’ for the 18-year-old.

The midfielder’s contract expires in 2022 and with Joan Laporta elected as the club’s new president, there should be more clarity about the player’s renewal.

Friday’s edition of Mundo Deportivo has a report titled ‘The renovations that the new board must face now’ and this includes extending Moriba’s contract.

It’s once again stated Ole Gunnar Solskjaer’s side and Leipzig are ‘on the prowl’ for the teenager, who is currently priced [most likely his release clause] at €100m. 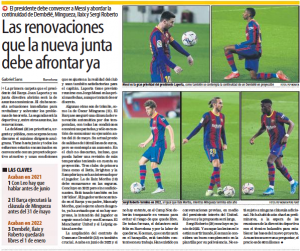 The newspaper explains the player’s father, Mamady Moriba, is now his agent and the representative has already informed the club that if there are no surprises, his son’s intention is to continue at the Camp Nou.

Ilaix is ‘enchanting’ at Barcelona, and this could make it difficult for the likes of Manchester United and Leipzig to acquire his services.