The Serie A club want Romelu Lukaku, who has made it pretty clear he wants them, and have been trying to build a deal with the Manchester club.

Several players have been offered as part of the transfer, and each one has been refused. It’s been made clear Lukaku will be moving for cash only, that’s the plan at Old Trafford right now.

Gazzetta even say the position of wanting €80m cash, and no less, has strengthened following the Belgian’s recent comments. Lukaku made it clear he fancies playing in Italy, and lifted Antonio Conte up as the best in the world.

Short of walking around in an Inter shirt, he couldn’t really do much more. 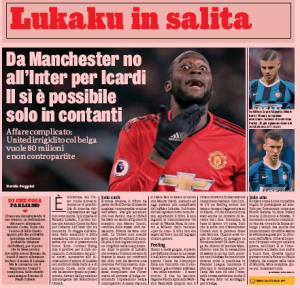 But there’s pessimism at the club because of Manchester United’s strong stance. Unless Inter sell Icardi, which is thought to be just as difficult a situation, then it’s unlikely they’ll be paying anything like €80m for Lukaku.

Gazzetta end their article by saying PSG have ‘done a survey’, trying to get information about signing the former Everton player.