Wolverhampton Wanderers have received an offer from Manchester United for midfielder Ruben Neves.

That’s according to O Jogo, who say the offer from United trumps the one currently on the table from Barcelona.

The newspaper explains that in order to complete a deal for Sporting Club de Portugal star Joao Palhinha, Wolves need to secure the sale of Neves in the coming weeks.

He is wanted by Barcelona, who this week held discussions with his agent Jorge Mendes, and that is a hypothesis which would ‘greatly please’ the midfielder.

However, the Catalans are not his only possible destination as Wolves also have an offer from Manchester United ‘in hand’. 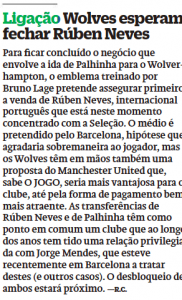 Indeed, according to O Jogo’s information, United’s offer would be ‘more advantageous’ to Wolves than the one from Barca as the form of payments is ‘much more attractive’.

The newspaper provides no detail on that front, but it seems that Manchester United would be willing to either pay more or put more down up front than their counterparts from the Camp Nou, which makes sense given the relative finances of both clubs.

Of course, the final decision will be Neves’, but it seems he has offers on the table, and there’s a feeling his future, and thus Palhinha’s move to Molineux is ‘close’ to being finalised.