Portuguese newspapers have two stories about the future of Alex Telles today, and neither of them look very good for Manchester United.

One of the articles comes from A Bola. The outlet says the Red Devils have been ‘challenged’ to up their bid for the left-back.

It’s claimed the €15m offered by the Premier League side ‘does not seduce’ Porto, who are currently making a ‘poker face’ and waiting for a better deal.

Even though the Dragons are in real need of money, they’ll keep waiting to get at least €20m for the transfer. It’s said this is a ‘patience game’ and a ‘test of nerves’ for both parties.

A Bola doesn’t present this as exclusive information, but they also don’t say otherwise. Their article makes it seem like they felt obliged to say something on Telles today, and this is it. 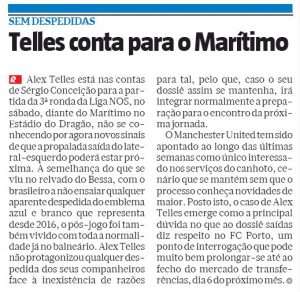 Meanwhile, newspaper Record writes that not a lot is happening. They claim that for now, the player is expected to appear for Porto against Marítimo on Saturday.

It’s said there are no signs that his departure is close, as despite the links with Manchester United, there’s no news about the chase from the Red Devils.

Record insist there were no signs of a farewell in the game against Boavista on Saturday, as there’s no reason for that, and things continue normally for Telles at Porto.