Since the Alex Telles saga started, we’ve been looking to find something strong from the Portuguese media regarding Manchester United’s chase for the player.

Most newspapers have been very quiet about it, or only taking claims from the English press. Our biggest hope was always to find something from O Jogo, which is a local outlet from Porto.

And the newspaper finally brings its own claims about it today, even though it won’t sound very good for Manchester United fans.

They say even though the international media ‘insist’ that Manchester United want the player, and already have an agreement with his agent, Telles is now actually closer to staying at Porto than moving to the Premier League side.

O Jogo writes that Manchester United recently made their first offer for the Brazilian, but the bid ‘didn’t even deserve a response’, as Porto considered it to be unrealistic and didn’t open talks. 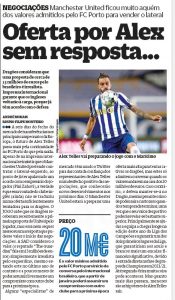 The outlet doesn’t seem to know the numbers on the table, and points out that the Guardian has been talking about a bid of €13m.

O Jogo insists that Porto will only negotiate for at least €20m. In case the Red Devils don’t pay that, then the Dragons would rather keep the player and continue using him, even if it means losing him for free at the end of the season.

The story’s final sentence goes as: ‘Until Monday a lot can happen. But the more days go by, smaller are the chances of Alex Telles leaving’.