With the season now finally over and Manchester United in next season’s Champions League group stage, the Red Devils can fully focus on the summer transfer market.

While there are more pressing matters, the striker position is one that could get reinforced, with Harry Kane a potential huge target for the Old Trafford side.

Whether they get the England international remains to be seen, as he will clearly be very expensive, and alternatives may be looked at.

Among those could be Dusan Vlahovic, who has been touted as a Manchester United target for quite some time now, but he also won’t be cheap.

Fiorentina have no intention to part ways with their star striker, who scored over 20 goals in the league despite his team being rather poor at times, and with a contract expiring in 2023, they aren’t forced to sell either.

That’s why Corriere dello Sport explain that despite interest from both Manchester sides, Liverpool and even Real Madrid, ‘a shower of money would be needed to knock’ on the Serie A club’s door. 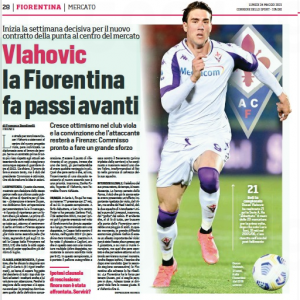 ‘No price has been set for the player’ as things stand, but what is ‘taken for granted is that to sit around a table, you will need monster numbers’.

Fiorentina’s plan has always to try and get Vlahovic to sign a new contract, perhaps including a release clause for a future transfer down the line, but they never intended, unlike his teammate Nikola Milenkovic, to grant an exit this summer.

It’ll be up to Manchester United to change their minds, then.