Yerry Mina spent the months leading up to the World Cup being dismissed in the Catalan media.

He was a mistake of signing, nowhere near ready for Barcelona, and an example of what had gone wrong with the club’s recruitment.

Undeterred, the Colombian went off to the World Cup and returned to his country a national hero. Several very good displays showed Mina as being powerful at the back and a genuine goal threat.

So did that make the Catalan media believe Barca would keep him? No, Clement Lenglet was signed, the upside of a good World Cup was the player’s value rising which could lead to a better loan deal or permanent transfer.

Everton have been the English club most linked, and RMC report Lyon have made a €30m offer for the player. 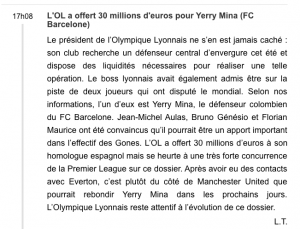 The French source also brings Manchester United into the equation.

It’s stated Jose Mourinho’s side and others are providing ‘strong competition’ for Lyon, and that Manchester United could come into the picture ‘in the coming days’.

It’s a new one for the Old Trafford target list.