Manchester United took Odion Ighalo on a short-term loan deal from Shanghai Shenhua in the winter market and prior to signing him, the Red Devils looked at Lyon’s Moussa Dembélé.

L’Equipe state the Old Trafford club ‘thought of formulating’ an offer for the 23-year-old, but didn’t take any concrete steps.

The newspaper adds ‘contacts remain’, which is most likely between the English club and the player’s camp.

They also mention the ‘bond between the two parties [mostly between United and Dembele’s camp] has been established for several years and has never been broken’.

Ole Gunnar Solskjaer ‘likes’ the former Celtic man’s profile, but there needs to be clarity over a few things, including Ighalo’s future.

Even though there have been claims of extending Ighalo’s temporary stay at Old Trafford until the end of the season, it’s not clear if his stay will be made permanent.

In addition to this, those in charge at Manchester United have indicated to ‘interlocutors’ there’s still no clarity on their transfer budget and also the budget allocated to sign attacking players.

Dembélé is included in the short-list, but his chances of joining United will mainly depend on their transfer budget.

The report claims the player’s asking price has ‘naturally declined’ due to the Covid-19 crisis and his current valuation is around €50m. It’s not clear if Lyon would accept this figure. 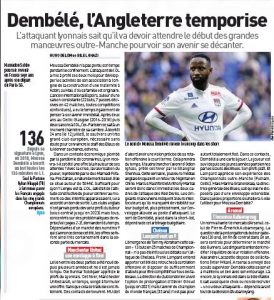 Lyon, however, are willing to grant their star a move as they are satisfied with the manner in which the Frenchman behaved after receiving offers in January.

‘England procrastinates’ for now, but there’s belief at the Ligue1 club that offers will arrive for Dembélé in the latter part of the summer window.

Whether it will be from Manchester United or another club remains to be seen.

‘Still a few days to go’ on Tottenham transfer – Clubs...