Ronald Araujo has been repeatedly linked with Manchester United in recent weeks, as Barcelona look to tie the defender down to a new and improved deal.

The defender is still on the same contract he had when playing for Barcelona B, and given he’s now a regular for Xavi Hernandez, he clearly deserves to be rewarded at a greater financial level.

A week ago we covered claims from Spain which stated Manchester United have already been making moves for the signing, letting the player know how far they’re willing to go to get him.

That was followed by reports of further contact a few days ago, and it’s the Old Trafford club who have been presented as the biggest threat to Barcelona getting a renewal signed.

Mundo Deportivo make it clear the player has an offer from England, with Manchester United the only club named in the report, but there’s still some confidence over a renewal. 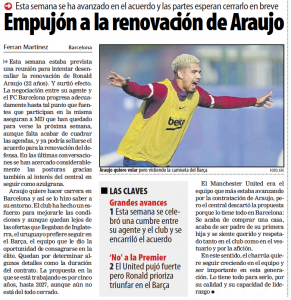 According to the claims, Araujo has recently bought a new house in Barcelona and wants to stay where he is. Therefore, a meeting has been scheduled to try and finalise things.

There’s no mention of what the player will be offered in terms of finances, and that could be where the Blaugrana face issues.

One for the Red Devils to keep an eye on then.