Ousmane Dembélé emerged as a target for Manchester United in the final weeks of the last window, but they failed to sign the Barcelona player.

The Red Devils still retain an interest in the winger, and according to Mundo Deportivo, representatives of the English club are probing to take him in January.

The La Liga side are aware of United’s ‘discreet movements’ and them making actual efforts to get the 23-year-old in the next window.

Barca also admit there’s a ‘real possibility’ for the France international to leave the Camp Nou, considering their need to raise funds to bring in new faces.

Ronald Koeman wants to bring in a new centre-back in the mid-season window and his wish will only be fulfilled if the Catalan club manages to raise funds through player sales. The former Borussia Dortmund man’s sale could help the Spanish giants.

Mundo warns the Premier League side are not willing to pay between €70m and €80m for him, which is the fee desired by Barca’s sporting leaders.

A loan move for Dembélé wouldn’t solve Barcelona’s issues in other areas. Barca, however, will study any proposal they receive for the wideman, ‘taking into account the needs of the squad’. Koeman wouldn’t stop the attacker from leaving because he has that position covered.

Dembélé’s current deal lasts until 2022 and he’s not accepted the club’s renewal proposal so far. If he continues to maintain this stance, then the Blaugrana will have a disadvantage because the World Cup winner will have a year left on his contract next summer.

The player prefers to continue at Barcelona and knows ‘time is running in his favour’ due to the duration left on his present contract. 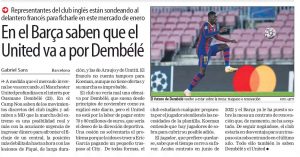 Manchester United are also aware of this and if the Old Trafford club fail to sign Dembélé in January, they could have a better chance of signing him on a permanent deal for a lower fee after this season.