Darwin Nunez is currently the big name in town as far as Portuguese transfer rumours are concerned.

The striker is thought to be on his way to Liverpool, with the Reds offering Benfica €80m plus a further €20m in bonus payments. On Thursday it was explained the Lisbon club want a little more, maybe an additional €5m, and Manchester United have been presented as a club hovering in the background.

Claims of Erik ten Hag flying to Portugal to try and steal the deal turned out not to be true, but Friday’s edition of Record states there is an effort from Manchester United to push Liverpool out of the way.

According to the Portuguese newspaper, Manchester United have, ‘in recent hours’, made a proposal with a fixed amount higher than the €80m put forward by Liverpool.

It’s made very clear in the article that Nunez has his heart set on a move to Anfield, and 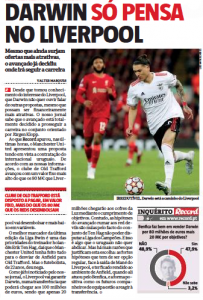 the prospect of a change of mind, and move to Old Trafford, is very much talked down.

Therefore, with Nunez being so keen on a switch to the Merseyside club, it wouldn’t make a great deal of sense for Manchester United to be making these efforts.

This could all be a plot from Benfica to get just a little more money from Jurgen Klopp’s side.