Borussia Dortmund are now willing to accept €100m for Jadon Sancho, should Manchester United come chasing his signature once more.

That’s according to SportBILD, who say that the financial crisis caused by the Coronavirus pandemic has changed the German club’s stance over their star.

As you’ll be well aware by this point, Manchester United spent most of last summer reportedly chasing Sancho, with it believed he was the priority signing for manager Ole Gunnar Solskjaer.

Ultimately, despite weeks of rumours and negotiations, they did not get their man, with United refusing to pay Dortmund’s €120m asking price.

Their interest has not gone away, though, and it is widely felt that they will return to try and sign Sancho again this summer, despite the arrivals of Amad Diallo and Facundo Pellistri.

Reports in Germany have indicated that Dortmund will now happily accept a reduced fee and SportBILD back that up, stating that BVB have now put a €100m asking price on the forward. 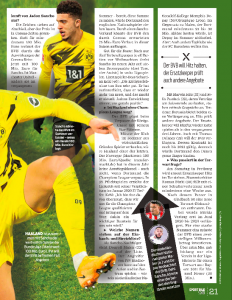 If Manchester United were willing to pay that figure, Dortmund would let him go knowing that it would cover the €75m losses in their finances that they are expecting due to COVID and leave them with money to spare too.

Of course, whether United would be willing to pay that is debatable.

Dortmund have put their stall out early, and it remains to be seen if those at Old Trafford think the new reduced price for Sancho is worth paying.