With the return of Romelu Lukaku on its way to becoming official, Inter will need to offload a few players off their books to make room for his wages.

One of the areas where they can afford to sacrifice a player is in defence, with Stefan De Vrij, whose contract expires next year, the likeliest to depart.

Manchester United have briefly been mentioned as a potential landing spot for the Dutchman here and there, and that continues to be the case courtesy of Corriere della Sera.

The newspaper, when looking at what Inter could do in the coming weeks, explain De Vrij’s exist ‘cannot be ruled out’ this summer.

That’s due to his contractual situation, and ‘Manchester United are interested’ in his services, most likely due to Erik ten Hag now being in charge and unlikely to get someone like Matthijs de Ligt. 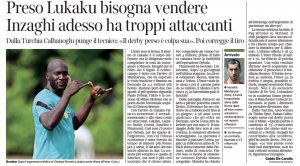 De Vrij would certainly add some experience to a frail Old Trafford backline, having shown what he can do in the past with Inter, helping them lift the Serie A title under Antonio Conte two seasons ago.

Not only that, but he certainly wouldn’t be expensive, which Manchester United could do with, having targeted more pricey options in other areas of the pitch.