Manchester United believe they can get Raphael Varane for €40m this summer, but Real Madrid are holding out for €70m.

That’s according to AS, who cover the player’s situation today after he held face to face talks with Carlo Ancelotti at Valdebebas yesterday.

As you’ll be aware, Manchester United are pushing to sign Varane this summer, with the Frenchman looking likely to leave Real Madrid as his contract is due to expire next summer.

He had hoped to sign a new deal at the club, but that has looked increasingly unlikely to happen, and so, now a transfer seems his most likely option.

Manchester United are at the front of the queue, and negotiations between themselves, Varane and Real Madrid have been ongoing for some time.

AS cover the situation today and say that Varane has been in ‘full agreement’ with Manchester United for several weeks, with a five-year deal and a ‘galactic salary’ on the table.

Negotiations were done with permission from Real Madrid, who decided not to raise their initial renewal offer.

Varane had harboured hopes of staying in Madrid but wanted increased terms, particularly after Sergio Ramos left for PSG. 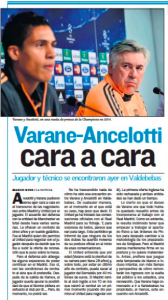 That’s not possible for the Spanish giants, though, and so he’s now focused on a move away, and Manchester United are in ‘official talks’ with Madrid to make it happen.

It seems they will go for the ‘long game’, however, after seeing their initial bid rejected. United’s belief is that they can get Varane for €40m as he is 28, but Madrid want €70m, which is the price they quoted before giving permission for contract talks.

So there is something of a gap between the two parties, and they have ‘given each other some time’ before proceeding.

This is all a little ‘uncomfortable’ for Varane, who had wanted to seal an exit before returning to pre-season with Real Madrid.

The belief is that it will be a rough transition from working under Madrid’s fitness regime to that in place at Manchester United, but there is little to be done at this point.

Madrid don’t particularly want to sell and will stand firm, waiting for Manchester United to make an offer that they deem acceptable.