While the need for a centre-back at Manchester United was alleviated by the arrival of Raphaël Varane, rumours about the Red Devils scouring Europe for a player in that position haven’t disappeared.

The latest name to be seen quite often alongside that of the Old Trafford side has been Gleison Bremer Silva Nascimento, or Bremer for short, currently at Torino in Serie A.

The Brazilian had been on the radar of Liverpool for some time, but their recent purchase of Ibrahima Konaté somewhat put an end to all that, opening the door for other clubs.

Manchester United seem to have put their foot in it for the time being, as a few articles have emerged of late about them keeping an eye on the player’s situation, whose contract expires in 2023.

That would leave him with just one year on his deal next summer; a situation Torino absolutely want to avoid if they can, which is why they are trying to tie him down for the foreseeable future. 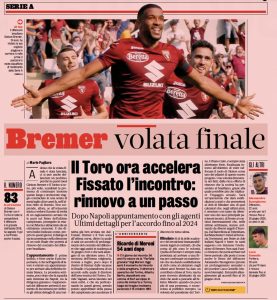 This is something Bremer wouldn’t be opposed to, and a ‘rich renewal’ has been offered to him by the Serie A side, which could ‘more than triple his salary’, according to Gazzetta dello Sport.

It’s something that ‘will give everyone satisfaction and allow the club to lock down’ one of their star players, who has attracted more and more interest as time has passed, and they state Barcelona, Tottenham, Manchester United, Borussia Dortmund, Inter and Napoli are ‘following Bremer’s evolution with interest’.

However, this renewal could put an end to some of these, although it will likely take a lot more than that to scare off Premier League sides and they wide wallets.