Lindelof has been strongly linked with a move to Manchester United since December, even though it often seems a lot longer than that. It’s repeatedly appeared that Benfica are keen to sell, wanting to bring some money in again, and have indentified Manchester United as an appropriate destination for the Swedish defender.

Given Jose Mourinho’s need to improve his options in central defence, it’s not such a bad idea, and Benfica could this time find joy in trying to sell a player to Manchester United.

Correio de Manha say Manchester United and Benfica are expected to complete a deal worth a total of €40m (€35m plus €5m in bonuses), and they say the announcement is 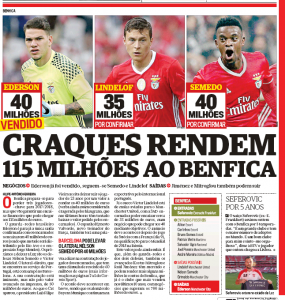 That match is Friday June 9th, and, is followed by a friendly away to Norway on June 13th.

There’s nothing to completely stop an announcement before that. It’s likely Sweden would let Lindelof have an afternoon off to travel for a medical if needed, so perhaps Correio de Manha are giving this one a week to sort itself out.