Borussia Dortmund midfielder Emre Can has revealed he will never play for Manchester United, due to his ties with Liverpool.

The German midfielder was linked with a move to Old Trafford throughout the January transfer window when it became apparent he would be leaving Juventus.

Numerous reports were indicating that Manchester United were keen, although it was made clear at the time a move was unlikely because of Can.

It was widely stated he wouldn’t join United due to his affiliation with Liverpool, where he spent four years and made 167 appearances before joining Juventus on a free transfer in 2018.

That rumour was never confirmed as fact, but now the player has insisted it is the case, revealing it to SportBild when discussing comparisons between Bayern Munich and Manchester United.

“The comparison fits,” he told the newspaper.

“Both are record champions and have huge strength. In addition, big names like Bastian Schweinsteiger and Owen Hargreaves played for both clubs.

“But I would never play for United because of my time in Liverpool. My heart won’t let me do that. The rivalry between the clubs is really huge.”

Can now finds himself at Dortmund after a disappointing spell at Juventus, where he failed to establish himself after impressing at Anfield.

He’s been a hit at the German club thus far, so much so they decided to turn his initial loan deal into a permanent one not long after his arrival. 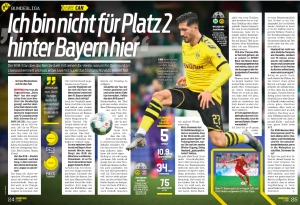 The Bundesliga side were one of several options he had on the table in January, but he says it was comparing them with Liverpool that swung it.

“I sign it 100 per cent,” he added when asked if the two sides compare.

“When I came to Dortmund in winter, I compared a lot of things here with Liverpool.

“The clubs are really similar, have a familiar environment and unique fans. And: Both love Jürgen Klopp!”