Even though Cristiano Ronaldo is currently heavily linked to an exit from Juventus, the European press isn’t at all certain of where he could land next.

Paris Saint Germain are sometimes named as the favourites to land the Portuguese star, but a return to one of his old clubs, Real Madrid, Manchester United and Sporting, seems to be a real possibility as well.

Most of these theories are approached by Italian journalist Claudio Raimondi, who on Sport Mediaset, now claimed that the Red Devils should not have the conditions to get the 36-year-old back to Old Trafford. The pundit actually believes Ronaldo is staying at the Old Lady for at least one more year.

“Cristiano Ronaldo has no intention of leaving Juventus, he wants to honour his contract expiring in 2022,” said Raimondi (via CalcioMercato.it).

“A return to Spain at Real is not a concrete hypothesis, while Manchester United do not have the economic strength for such an operation. There are no conditions for Ronaldo to leave Juve, even for personal reasons related to all his sponsors.” 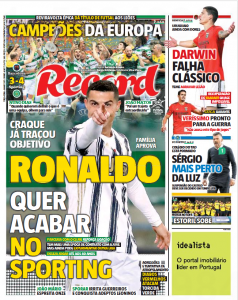 “Ronaldo has an idea for the future and we will reveal it to you in preview. He wants to finish his cycle at Juventus and then play for two years in Sporting Club Portugal.”

The future of Cristiano Ronaldo is highlighted by Portuguese newspaper Record today as well. The outlet also claims the player wants to end his career at Sporting, but it may take a while until the plan is triggered, since he feels like he still has a few years at the top level. The report doesn’t mention any other clubs he could be joining soon.