A Cristiano Ronaldo return to Manchester United was back in the headlines yesterday, as a claim from an ESPN journalist said the Red Devils are interested in having him back.

This is the kind of news which is covered all over the word, and obviously gets some special attention in Portugal, where they all keep an eye on their biggest star.

Record have the story on their front page, and their headline reads ‘Sharks circle CR7’.

They write that Juventus are willing to let Cristiano Ronaldo go if they fail to win the Champions League again, as they’re working on decreasing their wage bill.

There are two clubs who are said to be interested in signing the Portuguese star, and these are Paris Saint Germain and Manchester United. 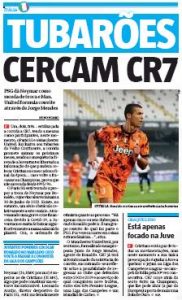 In the French side’s case, they’d be willing to make a swap with Neymar, but that could be a problem, since the Brazilian has a bigger salary than Ronaldo.

Regarding Manchester United, Record writes that the Red Devils have already made a ‘formal offer’ via Jorge Mendes, and the 35-year-old is currently analysing it, despite being focused on his season with Juventus.

It’s worth making clear that Record doesn’t say if that’s exclusive information or if they’re taking the claims from somewhere else. Some of their news indeed looks like ESPN’s, but they still seem to be pushing harder.

Since they were the newspaper who first reported Ronaldo’s exit from Real Madrid, it’s always worth keeping an eye on what they have to say.