The Portuguese press may not have any big claims on a Manchester United hunt for Porto’s Evanilson today, but it still doesn’t mean there aren’t any updates on this case.

Today it’s Jornal de Notícias who writes that following a bid of €60m plus €5m in bonuses, the Red Devils are now considering making a new attempt, this time with €70m plus add-ons.

The newspaper says this amount would be closer to convincing Porto, since it’s near the €80m set by the club as Evanilson’s price this window.

Jornal de Notícias claims the striker’s future is being handled by Jorge Mendes, who already worked on Fabio Vieira’s transfer to Arsenal and now sorts out Vitinha’s situation as well, and the Brazilian’s destiny should be confirmed in the coming days. 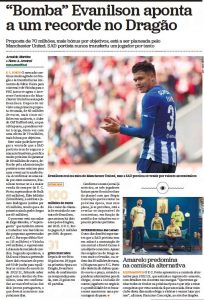 Meanwhile, newspaper Record is not so sure about Evanilson’s move to Manchester United. And that has a lot to do with another transfer.

That’s because Paris Saint Germain are said to be close to signing Vitinha, and following Vieira’s move to Arsenal, Porto only want to lose one more of their stars.

So according to Record, in case Vitinha’s move to France is confirmed, Evanilson will then be protected by his release clause and would only leave the Dragons this summer for €100m.

It’s worth pointing out that when speaking to the Portuguese media this week, the striker’s agent claimed there have been no official offers from Manchester United so far, speaking about Brighton interest in the player.