This week at Manchester United will be largely focused on welcoming Erik ten Hag to England and working to ensure the manager has what he needs over the summer and can start next season in a positive place.

Transfers are obviously going to be key, and any player with a close connection to the Dutch manager is likely to be linked with a move to Old Trafford. That’s been the case with Frenkie de Jong, and links with the Red Devils go back several weeks.

Initially, a price for the midfielder was put at around €70m, with the Catalan press pushing that figure as high as €100m last week. That feels like setting a bargaining position for Barcelona, and similar can be said of the links with PSG and Manchester City.

Sport link both, but make sure to say Manchester United have ‘already spoken’ with the Blaugrana about a summer move. 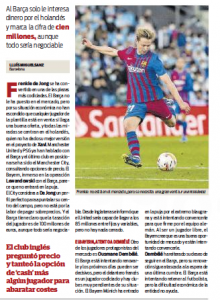 The Catalan newspaper make clear that Barcelona are only interested in a straight money deal, with it stated City would, should they move for De Jong, prefer to use a player as part of the deal.

That would favour Manchester United, and it’s made clear the €100m figure is negotiable. That’s the only way a deal would make sense for Ten Hag’s side, or any other club.