The newspaper once again states the Red Devils have the player in a list of ‘potential reinforcements’, claiming the Old Trafford side have prepared a bid of €40m plus €5m in bonuses.

That amount is very close to the price demanded by the Lions to sell the centre-back this summer, which is a direct payment of €45m, the price of his current release clause.

And when speaking of the competition for the defender, A Bola make clear Manchester United have an advantage over a couple of other Premier League sides who are also interested in Inácio. 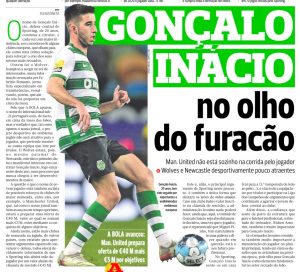 A Bola writes that Newcastle United and Wolverhampton Wanderers are keen. However, it’s pointed out that those clubs are not very attractive to the player, with them both being ‘on the same level’, while wants a club who will fight for titles.

Manchester United, meanwhile, are described as the biggest club interested, and therefore more likely to convince the 20-year-old.

So even though the Red Devils haven’t been fighting for big things recently, their history and name could certainly play a part in their fight for Inácio.