Since Ousmane Dembele’s failed move from Barcelona to Manchester United, there’s been several explanations in the Spanish and French media about what really went on.

France Football have another one in their edition this week, and it’s rather dramatic.

According to the report, Dembele’s late refusal to move clubs created a knock-on which saw moves also fail for Memphis Depay and Islam Slimani.

As the claims go, 48 hours before the window closed, Manchester United and Barcelona ‘agreed’ on Dembele’s transfer, which would have allowed the Catalan club to free up space on the wage bill for Depay. Slimani could have then swapped Leicester City for Lyon, in a transfer style game of musical chairs.

Things progressed well, and France Football state that at 6pm on Monday October 5th, five hours before the applicable window closed, ‘pre-filled documents were sent to 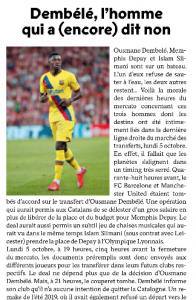 the various players to be transferred to their respective future clubs’.

However, at 8pm, ‘the axe fell’ as Dembele informed Barcelona he had no intention of leaving Barcelona for Manchester United or any other club.

Ronald Koeman was left ‘upset’ with the decision, and told the Frenchman he’s set for a ‘tough’ season.