Marseille’s Boubacar Kamara has ended up in the sights of Manchester City, Barcelona and Bayern Munich, according to Mundo Deportivo.

This report has been covered by journalist Miguel Rico and he states the La Liga side’s new board will find the 21-year-old’s name ‘underlined’ in the club’s priority target list.

The Catalan club have been following the defender since he was 16 and have received positive reports about him from their scouts.

Kamara’s contract with the Ligue 1 side lasts until 2022 and after Serie A clubs came forward to sign him, André Villas-Boas’ side leaked to the press the centre-back will not leave the club for a bargain price.

The France U21 international earns €2.5m per season and is in the top 10 highest earners at Marseille. Rico claims it won’t be long before Kamara sees an increase in his earnings because Manchester City, Barca and Bayern have their eyes set on him.

According to Mundo, the player’s valuation is set between €25m and €30m, and they further add ‘there could be an auction’ to secure his services.

Ronald Koeman’s side will not be in a position to compete if it comes down to money. 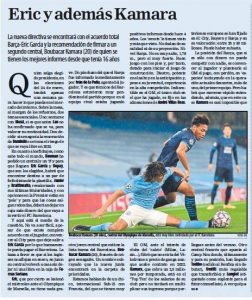 The option for Barca is to ‘convince the player’ and ask Marseille if they can make ‘payment in kind’ by including one of their own players as part of the deal.

Pep Guardiola and his side watched the Frenchman closely on two occasions when the Citizens faced Marseille in the group stage of the Champions League.

With City and Bayern also behind Kamara, Rico explains Barcelona will have to move fast.