Back at the end of the last season, it was claimed many times by the Portuguese media that Sporting would trigger the buying option for Manchester City full-back Pedro Porro this summer.

The player is loaned to the Lions until 2022, but to guarantee the signing as soon as possible, the Lisbon side would prefer to secure the permanent move now.

Well, truth is that Sporting haven’t moved so far, and according to the latest report from newspaper Record, there’s no longer a rush to make the signing.

It’s said there’s ‘no doubt’ that the transfer will be made, but the Lions will wait for their best financial moment to make the investment of €8.5m on the player. 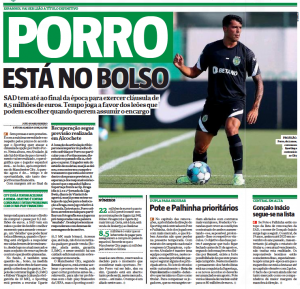 Manchester City, however, don’t seem to be very happy about this.

Record claims that the Premier League side are ‘trying to accelerate’ the process, as they’d like to make the sale before making other investments so they can escape from Financial Fair Play problems.

But Sporting will ‘carry on with their rhythm’, as they’re confident that they’ll make the signing, and they have until May 2022 to confirm it.