The Catalan media continue to say Nelson Semedo moving to Manchester City is a real possibility for the next transfer window.

A few days ago, Marca dismissed claims a move was close for the Barcelona player. They explained it was Jorge Mendes trying to build the transfer, so he could then also find a move for Joao Cancelo.

Manchester City had been offered Semedo in the winter market, and again recently, and weren’t jumping at the chance.

Thursday’s edition of Sport makes the whole thing even more complicated. It’s claimed Juventus and Inter Milan are keen on Semedo, but ‘above all, Manchester City’.

Sport say Mendes is really keen on the City option because it would see a big salary increase for the current Barca player, and also allow the agent to work on a Cancelo move. 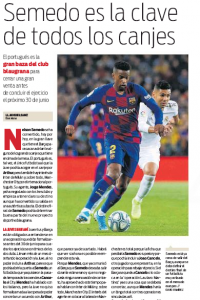 Sport even state Barcelona could take Cancelo from the Premier League club and then use him in the operation to sign Lautaro Martinez from Inter Milan, which makes a complicated situation even more so.

However, all of this depends on Manchester City grasping the opportunity to sign Semedo, which Marca insisted they haven’t.

Mendes will need to use his best persuasive skills.