Kalidou Koulibaly has been all over the Italian sport media this week, largely because Napoli need to bring in some sales quickly, having spent €180m between January and July.

Earlier this week, Gazzetta dello Sport reported the Serie A club are looking at making €150m from the transfer market, and the defender would represent a large chunk of that.

Gazzetta explained Manchester United are willing to pay €70m for the 29 year old, and that if Napoli couldn’t get anything better then such an amount ‘cannot be refused’.

Since then, it’s been more Manchester City in the picture, with claims of Koulibaly’s agent, Fali Ramadami, travellling to Capri to present a new offer to Aurelio De Laurentiis from Pep Guardiola’s side.

Depending on which reports you choose to believe, that offer was either €63m or €65m.

Corriere dello Sport take a look at the situation, and they say Manchester United ‘have other things to think about’ right now, distracted by their participation in the Europa League.

However, the newspaper add it’s ‘forbidden to be distracted’ in the transfer market, and Manchester City ‘take advantage’ of their neighbour’s dithering.

Ramadami has ‘whispered’ to De Laurentiis that City will pay €70m, including bonuses, 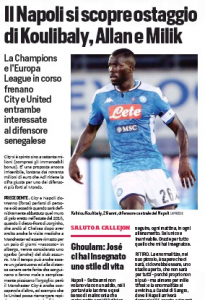 which isn’t enough for the Napoli president. In reality, given the earlier claims, if there’s no other offers it should be sufficient. Direct talks, without the intermediary doing everything, are suggested as a way forward.

Meanwhile, Manchester United could ‘remerge quickly’, and it’s once again stated they offered £108m last summer, a favourite claim of the Napoli media, and one which has long felt pushed by the Italian side.

A transfer war between the two Manchester clubs is something Napoli would love, whether that’s a reality is quite another thing.