Wednesday’s edition of A Bola has a big Joao Felix article.

That’s not unusual, they often do, and this time it’s about Manchester City.

For a week or so the Premier League club have been strongly linked with a move for Sporting’s Bruno Fernandes, with the Portuguese media seriously talking up the potential move.

That story made it’s way to England in recent days, with claims remarkably similar to those which had originated in Portugal. That led the Portuguese media to row everything back a few strokes, saying the deal isn’t as agreed as is being claimed.

Felix has also been linked, although not as strongly. A Bola say Manchester City will make a move for him, but only if Gabriel Jesus leaves the club. The Brazilian’s exit would provide transfer funds and also leave a space in Pep Guardiola’s squad. 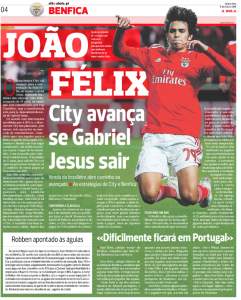 Manchester City’s leaders are said to think the player’s €120m buyout clause gives him an exaggerated price, but Benfica have been making noises about sticking to that amount.

Therefore, City have come up with a plan. They’d build a deal worth a headline €120m figure, which includes players in part-exchange, an actual transfer fee, and bonuses related to the youngster’s future success.

It would still depend on Gabriel Jesus being sold, according to A Bola.