When checking the Portuguese media today, we get to see something very peculiar regarding Manchester City’s reported chase for Sporting youngster Nuno Mendes.

Several local newspapers, such as A Bola, Correio da Manhã, O Jogo and Record all received a message from an ‘official source’ from the Premier League side.

Clearly bothered with the transfer rumour, Manchester City had a statement to all those outlets claiming they were never interested in the 19-year-old and will not make any efforts to sign him this summer.

“Manchester City are not interested in Nuno Mendes. We didn’t make any offers, nor will we”, said their message.

That statement was enough to convince most outlets that Manchester City are indeed not making a bid to sign Mendes in this transfer window. But Record didn’t buy it. 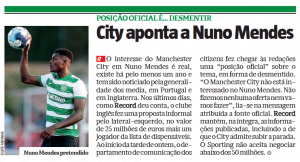 The newspaper, who was the first to report the Cityzens’ bid earlier this week, stand by their claims and says that despite the club’s message, they should still improve their offer.

Record first reported that Manchester City’s bid for Mendes was of €25m plus one player.

Then they said the second one would be raised to €30-35m and insist that Sporting do not accept to negotiate the full-back for less than €50m.