Manchester City have come to an agreement with Benfica over a deal for defender Ruben Dias, with them set to pay €65-70m for his signature.

That’s according to Record and O Jogo, who both cover the situation today and provide a very positive outlook on the situation.

Reports emerged on Friday about Manchester City’s interest in the centre back, with claims that an agreement had been reached for a deal worth €65m that would see Nicolas Otamendi go the other way.

That was followed by claims Dias could arrive at the Etihad for his medical on Sunday, with manager Jorge Jesus also adding fuel to the fire with his comments about the player.

The two leading newspapers, Record and O Jogo, now cover the deal and present it as pretty much close to completion.

The first states that there is an agreement between the two clubs on a deal worth €70m, a decent price given h 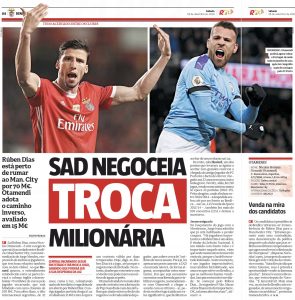 O Jogo, however, have it at a little bit less reporting that there is an agreement for €65m. That, though, is €50m in cash plus Otamendi, who is valued at €15m.

Either way, a deal is on the way, and Jorge Mendes is naturally at the centre of it.

Record explain that he represents both players and also has ‘good relations’ with both clubs so has been able to broker the deal.

The transfer is not ‘closed’ as yet as there are final negotiations to be sorted out, principally regarding Otamendi’s contract.

He has two years left on his deal with Manchester City and earns around €7m a year, but that is a price Benfica won’t match so they need to ‘find a formula’ to make the deal ‘viable’. 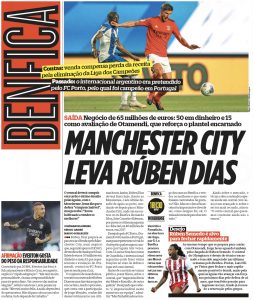 The idea is for him to find an agreement with the Citizens that would see him receive a ‘significant amount’ when he leaves and thus make it easier for him to accept a reduced salary at Benfica.

So the deal remains in the balance at this stage, with Dias set to play for Benfica in their clash with Moreirense today.

Both newspapers, though, present that game as a final farewell suggesting they feel the deal will be closed sooner rather than later and Pep Guardiola will finally get the second centre back he’s been looking for all summer.