With Barcelona having a new president, the Catalan media is bursting with excitement over what the future may bring. Pessimism has been left behind for a few days and there are now confident claims ahead of the coming months.

Given his contract expires at the end of the season, there’s not a great deal the Premier League club could do to stop the move if they want to keep the forward with them.

According to the report, Aguero’s agent contacted two of the candidates during Barcelona’s presidential election process, including Joan Laporta who came out on top in the vote. 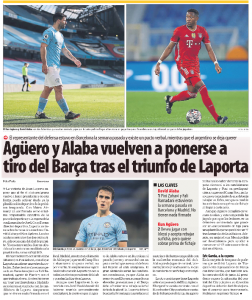 Aguero is said to be prepared to accept a wage cut to make the move, although he’d expect a signing bonus given he’d arrive as a free agent. The Manchester City player’s friendship with Lionel Messi is seen as a bonus, because it’s thought signing the Argentine striker would help convince his compatriot to stay at the Camp Nou.

Mundo Deportivo again report Barcelona are confident of securing Eric Garcia, also on a free transfer, when the season ends.