Despite claims that Isaak Touré was getting closer to a move to Manchester City, the Le Havre youngster is instead staying in France.

The 19-year-old will be going to Marseille, where he currently is to finalise the transfer, giving the Ligue 1 side some relief at the back, and a very talented player for the future.

A report from L’Equipe a couple of weeks ago suggested the player was one step away from Manchester City, having visited the facilities and liked what he had seen.

However, it was pointed out the Etihad contingent had some competitions with both Lyon and Marseille also pushing for a deal. 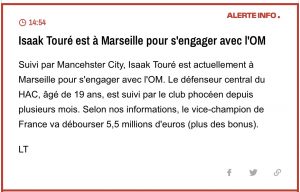 It’s the latter who have won the race, beating Manchester City, as RMC Sport report the player is currently in the city to get the deal done.

As for a transfer fee, it’s stated the Champions League club ‘will spend €5.5m + bonuses’, which could be a bargain if the player fulfils the potential many see in him.