As Sporting are still hopeful they can keep Rafael Leão at the club, a move to Manchester City continues kept at the side for now.

A story from newspaper Jornal de Notícias on Tuesday explains that the Lions are having a tough job convincing the youngster to sign a new deal with them, but will fight until the last minute.

After rescinding his contract at the end of the season, Leão is now evaluating his options, and according to Jornal de Notícias, it’s his father and agent who are blocking his return to the Lisbon side for now.

As we’ve explained many times, it’s a complicated situation, because even though the player is technically a free agent, Sporting will still demand a fee in case the midfielder signs for some other club. 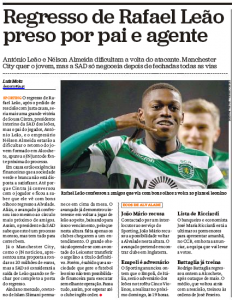 That’s why Manchester City have made a €20m bid for the youngster, according to the claims. Sporting, however, still didn’t gave an answer, as they will wait until the last minute while they hope Leão can stay.

In case the ‘doors are closed’ to his return to Alvalade, then it’s possible that the negotiations with Pep Guardiola’s side can be completed.

The Premier League champions are the only club linked to the wonderkid, as the local media doesn’t take Borussia Dortmund’s interest very seriously anymore.