Sevilla are looking to earn close to €90m if they are to sell Jules Koundé to Manchester City this summer.

That’s according to Mundo Deportivo, who say City are willing to ‘throw the house’ at the Spanish club to make a sale happen.

Manchester City have been heavily linked with Koundé for the last week, with Pep Guardiola determined to add another centre back to his squad following the arrival of Nathan Aké.

They’ve already seen a €65m bid rejected for the centre back, but every indication has been that they would return to try and secure his signature.

If they do so, Mundo Deportivo say they will have to pay a princely sum to make a move happen.

According to them, Sevilla’s ‘idea’ with Koundé is to get a sale that is close to his release clause, which currently stands at €90m.

That money, coupled with the income from the Champions League, could allow Sevilla to reinvest heavily in the squad, with the newspaper stating that director of football Monchi ‘promises war’. 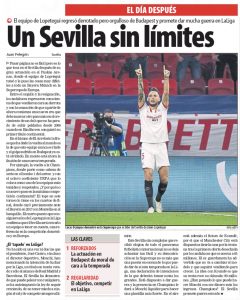 Whether Manchester City will be willing to go that high, though, is debatable given what’s happened this summer.

They’d likely have a similar stance should Sevilla be demanding such a price for Koundé, which may explain the reports of a bid for Benfica’s Ruben Dias.